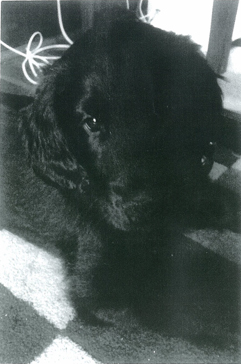 “Little Mr Mid-Tail” as he’d been known for the first eight and a half weeks of his life (a reference to the place of ID marking at time of whelping), trotted happily along the path to their car with the young couple who had fallen in love with him, now his owners – new red collar and his new name : “Winston”. As I watched him leave I whispered “Have a happy life”…and so it was – for just a few short weeks.

He was a huge success in his new home, which was not surprising – a sociable, happy, sweet, active, intelligent puppy, he’d been first at everything from birth – first to climb out of the whelping box, first to carry a toy, to retrieve a bumper, the first in trouble – when first night he’d nearly strangled in some of his mother’s feathering, his choking cry had catapulted me out of my sleeping bag to his aid). Now, first to leave, he had travelled well going home, made friends with the cat, been respectful to the dog next door, slept through the night up in their bedroom – crate door open, not a puddle in sight..no fuss.  Only one thing had not gone to plan – his owner file was lacking my usual Instruction Booklet for New Owners, which  covers on the first page all the points discussed routinely at hand-over, in particular safety issues – but seems likely much is forgotten  in the excitement of taking a puppy home….  On this occasion the printers had been slow, and then conditions too icy to contemplate leaving puppies unattended while driving to collect the booklets from town in time for the owner files; a sad twist in the chain was that when the booklets were finally mailed, Winston’s took 6 days (with 1st class stamp) to travel the 70 mile journey – arriving just one day too late to save him..

My phone rang early that morning — Winston’s new mummy sobbing ” we’re so sorry .. we didn’t know..”    Dear Little Mr Mid-Tail/ Winston was dead in his crate .. and yet more coincidences completed the tragic chronicle… Being a farming area, there had been some family comments about a dog in the bedroom, so last night the crate had been moved downstairs, and the door closed as a precaution..As usual Winston had accepted everything calmly, and had slept through the night, good as gold.  So, his owners  working later next day, the early morning alarm was snoozed, and then again a quarter of an hour later; the next reminder took them downstairs where all was very still.  Especially Winston, lying beside the door of his crate, a little blood trickling from his mouth, still warm, not breathing.. and – you’ve likely guessed it – leash tag on his new collar jammed between the wire frame of the crate and the door. Must have investigated the door, after hearing the alarm. He could not be resuscitated.                                                 Even now, Winston’s story has been difficult for me to write, and haunts me still – a series of tragic and ironic if onlys….

No puppy should die like that, panicked and alone.. when recounting it locally, I have been astounded at the numbers of people who admit leaving puppies/ dogs crated without removing collars; one comment was that the collar was likely not tight enough… COLLARS AND CRATES DO NOT MIX . Additionally, if collars are worn, dogs at play together should be supervised – in the past there have been tragedies there too, collars caught up on a tooth, as well as dogs hung up by collars on water buckets in crates.

Please pass this on to other dog owners, and if you wish, breeders please feel free to make photocopies for your puppy files. If Winston’s death prevents even only one similar tragedy, then it will not have been so pointless. I suggested to one manufacturer a small hazard warning plaque on every crate, but so far have not had any response..